The Mariana Trench, located in the Pacific Northwest, east of the Mariana Islands, near the island of Guam, is the ocean trench recognized as the deepest place on earth. Its lowest point, "Deep Challenger", is at 10,994 meters deep, the pressure is over 1,100 atmospheres while on the surface of the Earth it is only one! It was discovered in 1875, during the Challenger expedition aboard the HMS Challenger (5th of the name), ship of the Royal Navy. Depths of more than 8000 meters were recorded. It was not until 1951 that the pit was studied for the first time in its entirety by the HMS Challenger (7th in the name), and its lowest point, "Challenger Deep" named. In 1957, Vityaz, a Russian ship, announces that the maximum depth of the pit is 11,034 meters. But this new bottom has never been detected anymore, that's why this depth has not been approved. On March 24, 1995, the Kaiko submarine reached a depth of 10,911 meters.
Three men reached the bottom of the Mariana Trench 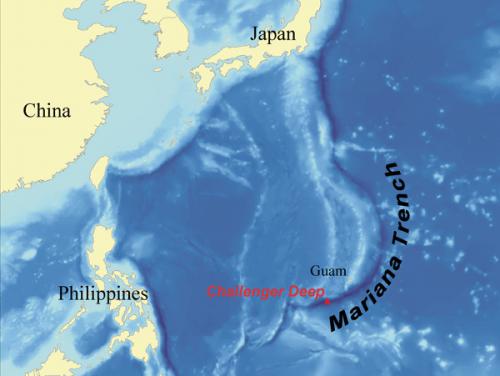 - In 1960, Jacques Piccard and Don Walsh, aboard the bathyscaphe Trieste, descended to a depth of 10,916 meters.
- In 2010, almost fifty years later, James Cameron, the director of Abyss, Titanic and Avatar, reached, in his mini submarine Deepsea Challenger, 10,898 meters. It took him two hours and thirty-six minutes to get off, and only 70 minutes to get back up. A 3D documentary was screened in cinemas.

Back to Наука, Техника, Прогресс

0 user(s) are reading this topic